It is with some level of anxiousness that I begin writing this first post. I try as best as I can in my daily life to maintain a foundation of humility and to do away with my own ego as much as possible – and so the notion of dedicating a website largely to one’s own athletic pursuits can, at first glance, seem to fly in the face of that.

This being said, I hope that Misogi Team can be far more than just another Instagram fitness account in a market that is already heavily saturated. Rather, the site intends to document both the physiological and psychological science behind endurance and our often self-imposed limits, as well as articles on the achievements of men and women far more interesting and accomplished than myself. I hope that at least one person following the site feels to some extent inspired to raise their own bar for themselves and to try and see just exactly what they are capable of, just as the practice of Misogi has done for me.

Obviously, the site will also serve to document my training (ideally in an engaging an non-egotistical manner) and preparation for the seemingly endless physical and mental challenges that I have chosen to lay out for myself – but to a larger extent, it will focus on the mindset and psychological exercise that I am convinced are the keys to achieving one’s objectives.

The deep ocean scares the absolute shit out of me. I honestly wish that this wasn’t the case, but it would be a lie to say anything else. In my own defence, it is not so much the depth but rather Australia’s Great White inhabitants that I have such struggles with. I have spent my entire life in and around the ocean, but the further I have tried to venture into open water swimming with comfort, the more readily apparent my genuine fear has become.

Open-water training in the South of France

I hear romantic stories from other triathletes and long-distance swimmers about the pure bliss and euphoria they find in the open swell, and the remarkable beauty of the wild ocean. I’m sure that it’s there, and I deeply wish I felt the same – but the looming threat of a fish-related death seems almost undeniable to some fight-or-flight part of my brain.

It may indeed seem trite and overused, but I do sincerely believe that there are wonderful times to be had over the borders of your comfort zone – as a thousand online personal trainers can tell you, with any number of nice motivational posters. Most of the meaningful experiences I’ve had in my relatively short life thus far have been as a result of medium to severe discomfort and unpleasantness. Both physically and mentally.

As well as that, on a personal level, I really do not like something so intangible having such strong control over me. Such a thing as fear will just stand in my peripheral, as an unwavering testament to that which I cannot do.

So it seemed suitable to orient my next big athletic goal around the bountiful aquatic sphere of the Australian ocean.

On March the 23rd of this coming year, I will be attempting to swim the equivalent thirty-three kilometres of the English Channel in the open waters of South Australia, while fighting a very tangible fear pretty much every stroke of the way.

I’ve been a strong swimmer, but never a wonderful swimmer – having come from a traditionally long-distance running background with the odd triathlon thrown in. Comfortingly (?), the reading I have done on the matter reinforces my suspicion that you don’t necessarily have to be fast – you just have to be able to continue, all day long, against an ever-mounting desire to stop. This attempt would be nearly seven times as far as I have ever swum before, in open waters, with the very real possibility of having to swim in darkness at either end of the day. Two rather daunting elements for me to mentally adjust to, and to prepare for.

Despite my lack of a swimming pedigree, the foundational skills towards achieving something like this are deceptively intuitive, and are techniques that I have practiced in other arenas, for all of my life. Someone swims the English Channel is very much the same manner that anyone does anything seemingly difficult.

You strip the task down into manageable components, and tackle them individually on the micro level. What starts as an insurmountable distance is broken down into several, smaller pieces that seem within the realms of possibility. This is one of the central rules of Misogi – ‘process over outcome.’

If every single process ( in this case, each stroke) is delivered with maximal intention and efficiency, and continuously delivered, then the outcome is inevitable – the Channel will be crossed. So attention needs to be stripped entirely from the far-away objective of finishing the swim, and rather placed wholly on being fully present for each individual stroke. The beach at the end really shouldn’t be on my radar until it is absolutely safe to let my mind wander, and instead I should resign myself willingly and intentionally to the possibility of sixteen hours with my head facing the bottom of the Southern Ocean.

These are techniques that we all use at some point in our lives – be it at school, or at work, or with raising children. We take a huge project and we strip it down to a more palatable size, and focus on what we can handle right now, rather than the overbearing big picture. You don’t spend the first year of medical school stressing over your internship several years later. For some strange reason, I have the impression that very few people apply this some school of reasoning to their own physical capacities. We are truly all capable of far more than we ever ask of ourselves, we just tend to focus on looming goals rather than the actual body of work itself.

That is the theory, at the very least. What remains for me is obviously a huge amount of time between here and now spent progressively overloading swimming distance and time, in an effort to induce chronic changes in the body to adapt to different movements and endurance-swimming specific demands. Perhaps more importantly for me, there will need to be a lot of time spent mentally preparing for dealing with what is a very real personal fear – as I will explore and write of in the coming training weeks.

At the very least, I do not have any fear of failing – despite failure’s very real presence here – or a fear of the proverbial ‘biting off more than I can chew’. I will happily go down swimming, even if it means being dragged from the water into a support kayak, a mere seven kilometres into the attempt in March. There is glory in failing in great attempts, as Bruce Lee so eloquently spoke.

I really, sincerely believe that there are countless benefits to my life brought on by attempting to do things that fully extend my perception of my abilities, or my abilities themselves – even if that means falling well short of my target. Process over outcome, once again. 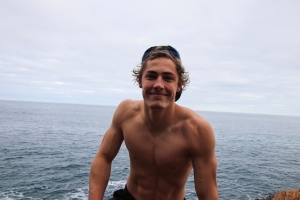 If you’re interested in reading about the coming months and my experiences of trying to get into Channel-crossing shape, then stay tuned for following articles. I’ll explore the physiological requirements and science behind moving from my current state of fitness to a more aquatic one, as well as my experiences training and the experiences of other men and women who inspire me. As much as it fascinates me, I will try to prevent the sports science components from becoming overly dry – and similarly try to keep a more grounded approach to talking about myself and my experience than the “me, me, me” attitudes that can easily come with this territory.

2 thoughts on “Channel Swimming, An Introduction”

dedicated to the dogs who find us